K-TIG is playing a significant role in the construction of the US$170 million Acueducto Gran San Juan—a 50km (31 mile) pipeline that will transport drinking water to San Juan in Argentina. Of the 50km of pipeline, 15km will be fabricated by Industrias Metalúrgicas Jaime SRL in 1600mm (63 inch) diameter, 9mm (3/8 inch) thick stainless steel using K-TIG. This 15km of pipeline represents almost half of the project’s total investment.

Just four months into this huge project, the productivity gains delivered by K-TIG have proven to be remarkable. The fabrication of the pipeline is set for completion an astonishing 550 days ahead of schedule—from 720 days, down to just 162 days.

Both the longitudinal and circumferential weld seams in the pipeline are being welded in a single, full penetration pass. The resulting welds are x-ray quality, the caps and roots are smooth and clean, and no post-weld grinding is required. There is no weld preparation needed, and K-TIG is using a fraction of the gas and wire that would have been consumed with other conventional welding processes. 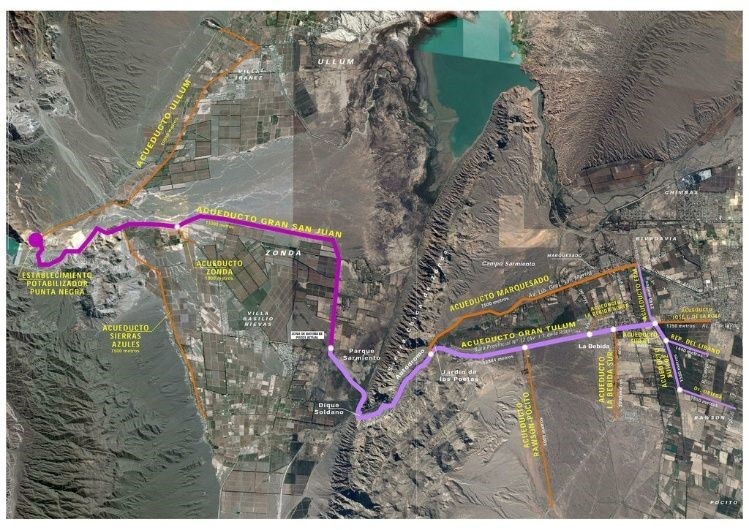 The objective of the Acueducto Gran San Juan project is to provide a secure water supply to the rapidly growing metropolis of San Juan, in west-central Argentina. San Juan has a desert climate, and with the population expected to boom from 680,000 to over one million in just 50-years. The Argentinean Government needs to ensure that infrastructure is in place to provide the community with a safe, secure drinking water supply.

The construction of the 50km US$170 million Acueducto Gran San Juan will significantly increase water security to San Juan and surrounding areas, and expand the supply of drinking water to localities that are currently without water, including areas of Zonda and Rivadavia.

The Acueducto Gran San Juan project consists of the installation of a new drinking water system to transport water from wells located approximately 25km west of the city of San Juan to complement the existing water system. The new system will require construction of a water treatment plant (to ensure the water is fit for human consumption), known as the Punta Negra plant.

The Punta Negra plant will be located in the Andes mountains, at 1200 metres (4000 feet) above sea level, and will be built at the foot of the Punta Negra Dam. The water collected by the plant will be treated via several water treatment processes, including flocculation, decantation, filtration and disinfection. The water will then be transported through the Gran San Juan Aqueduct to Zonda and Gran San Juan, and then through the Ullum Aqueduct to the Marquesado Water Treatment Plant.

The system will also require the construction and installation of stainless steel and high density polyethylene (HDPE) pipelines. These pipelines will raise the volume of water being transported from 1.5m2 per second to 3.2m2 per second.

Of the 50km of pipeline, 15km will be fabricated in stainless steel that is 1600mm (63 inch) in diameter and 9mm (3/8 inch) thick. Known as Acueducto Gran Tulum, this 15km stainless steel pipeline represents almost half of the project’s total investment. It is being undertaken by Industrias Metalúrgicas Jaime SRL, who has assembled over 4600 tons of stainless steel to fabricate the pipeline.

The project is being jointly funded by the Kuwait Fund For Arabic Economic Development (US$51 million), and the Argentinean Government (US$127.6 million).

There are also several complimentary projects being undertaken, including:

Gustavo Gonzalez (one of the owners of Puertotrans SRL) explains, "Before they started the project, Industrias Metalúrgicas Jaime SRL came to me asking for the best welding method available in the market. They wanted to use the ultimate in technology because of the magnitude of the project and what it represents for the people of San Juan and Argentina—there is no other pipeline in Argentina or even South America with the same characteristics. They also wanted to reduce costs whilst still achieving the best possible quality," said Gonzalez.

"Two years ago, the best welding method we had for this project was submerged arc welding. It seemed that this would be the best welding process to use. But, after some research on new welding technology, I found K-TIG. This was a major turning point. The more I studied K-TIG, the more I needed to know." 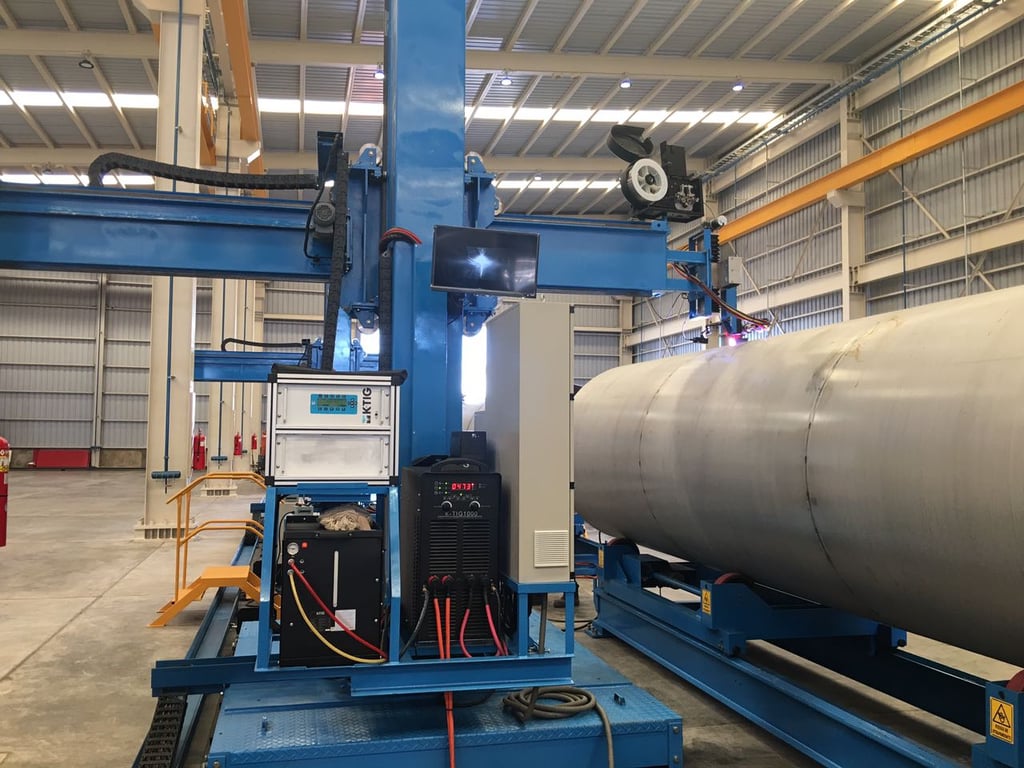 Submerged Arc Welding (or SAW welding) is a process that has been in use since 1935. The process requires a continuously fed consumable electrode. The weld is protected from atmospheric contamination by being "submerged" under a thick layer of granular flux which typicall consists lime, silica, manganese oxide, calcium fluoride, and other compounds. As it becomes molten, the flux becomes conductive and provides a current path between the electrode and the material being welded. The flux covering the molten metal helps to reduce sparks and spatter, and suppresses the intense ultraviolet radiation and fumes that are generated.

In contrast, K-TIG (Keyhole TIG) is a high energy density variant of GTAW. K-TIG is a high speed, single pass, full penetration welding technology which welds up to a 100 times faster than GTAW/TIG in materials up to 16mm (5/8 inch) in thickness, and typically operates at twice the speed of plasma welding.

Up to 15km of the Acueducto Gran Tulum will be constructed from 9mm (3/8 inch) thick stainless steel. K-TIG can comfortably perform full penetration welds on stainless steel up to 13mm (1/2 inch) thick in a single pass. SAW, on the other hand, has limited penetrative capabilities, with single pass penetration only available on materials up to 4mm thick. To penetrate materials beyond this thickness, V-groove root and filler passes are necessary, which significantly adds to the cost, timeframe and productivity of the operation.

K-TIG appeared to be an almost magical solution that would help us achieve all our goals in record time and at the lowest cost possible.

K-TIG appeared to be an almost magical solution that would help us achieve all our goals in record time and at the lowest cost possible.

How Did K-TIG Perform?

Gustavo Gonzalez had high hopes for the impact of K-TIG. Just four months into the project, all of Gonzalez’ expectations for delivering this enormous stainless steel welding project on or ahead of schedule have been realised.

"The fabrication of the pipeline began four months ago. I am pleased to report that what we had heard about the speed, productivity and quality of K-TIG welding is true."

The fabrication of the pipeline began four months ago. I am pleased to report that what we had heard about the speed, productivity and quality of K-TIG welding is true.

K-TIG delivers very clean and smooth weld seams and perfect roots. There is no weld preparation needed. It is extremely fast, uses a fraction of the gas normally required and a tiny fraction of the wire consumables we would have consumed with any other process. The productivity that it is delivering for this major project is remarkable - it is at the highest level."

"The productivity of the K-TIG process is allowing us to fabricate an average of eight stainless steel tubes per day. Each of these tubes is 12m long, 1.6m in diameter and 9mm thick. The timeframe in which we had expected to complete the fabrication of all 1300 12m tubes was 720 days - indeed we are contracted to this timeframe. The use of K-TIG has transformed the economics of the project. We will complete the fabrication in 162 days – an astonishing 550 days ahead of schedule, which is a fantastic result for us, the Government and the people of San Juan," said Gonzalez.

K-TIG came about through a desire to create a welding technology that delivered a process that was simpler, faster, cheaper and capable of completing higher-quality welds than the welding processes currently available. K-TIG's ability to completely transform a project of this magnitude and importance is a testament to the efficacy of its technology.

Read more here about how K-TIG has successfully performed on other projects, and saved companies like Bilfinger nearly 92% in costs, and increased productivity by 90%.

How Did Industrias Metalúrgicas Jaime Engage With K-TIG?

The K-TIG sales, installation and commissioning process is simple and streamlined. This simplicity is evident in how Industrias Metalúrgicas Jaime SRL came to select K-TIG as the welding process for the Acueducto Gran Tulum water pipeline project.

After receiving an initial email enquiry from Gustavo Gonzalez, Adam Poole (K-TIG’s Director Sales & Commissioning) scheduled a call to discuss the scope and scale of the Acueducto Gran Tulum project in more detail. During this initial call he ascertained the basics of the project (such as the type of material to be used, it’s thickness, the purpose of the pipeline and the length of weld required) and was able to confirm that K-TIG technology would be an ideal fit.

After initial confirmation of project/application suitability, K-TIG typically produces a detailed weld assessment which compares the productivity of K-TIG to the process currently being used. This comparison demonstrates how much gas, wire and consumables can be saved by using K-TIG, as well expected weld time, speed and penetration improvements, and is used by K-TIG’s customers to calculate return on investment (ROI). Due to the productivity gains, the payback on a K-TIG system can be as little as several months.

However, as this was a brand-new project, there was no existing process with which to base the comparison. Instead, K-TIG created a detailed weld layout for the entire project. In doing so, K-TIG determined the total weld length required and the likely preparation and post-weld treatments needed for various welding processes. These figures were then compared to K-TIG. It was quickly evident that the productivity and speed of the K-TIG welding process was in a class of its own, with enormous projected time and cost savings.

K-TIG was so confident of the results, it guaranteed them.

When it was clear that K-TIG was a solid fit to the requirements of the project, representatives from Industrias Metalúrgicas Jaime SRL visited K-TIG’s head office in Adelaide, Australia to get to know the K-TIG team and the technology. During their visit, the K-TIG team provided in-depth information about the K-TIG system and technology, and performed a variety of live welding demonstrations in the same material and thickness to be used in the project. Industrias Metalúrgicas Jaime SRL was so pleased with the results and expected impact on the project that they placed an order for 5 K-TIG systems.

The K-TIG systems were then shipped to Industrias Metalúrgicas Jaime SRL’s purpose-built production facility in Argentina. Adam Poole and two other members of K-TIG’s engineering team flew to Argentina to commission the systems. The team ensured that the system was expertly installed and all necessary elements were integrated and automated. Training was then conducted for Industrias Metalúrgicas Jaime SRL’s team, and many coupons were run for testing – the results of which were fantastic.

Want to engage with K-TIG? Contact us here to learn more

How does K-TIG compare?

Unlike plasma arc welding, there is only one welding gas and no orifice, making the process exceptionally robust and welding procedures highly repeatable in a wide range of materials, thicknesses and applications.